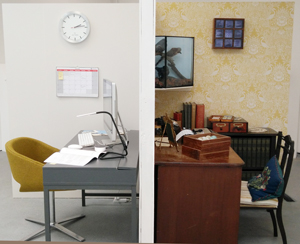 In this installation we are posed a question, ‘In the digital age, are online resources such as Wikipedia, Pinterest or Ask Alexa any more reliable than the encyclopaedias, museums or oracles of the past?’ To search for an answer, we are presented with the offices of two collectors and pseudo-scientists, theirs is a world where truth and myth meld with science and folklore, a place inhabited by a chimera known as the Scribbler Bird. The 'antient' office is reconstructed from images taken in the 1950's it contains a copy of the encyclopedia Britannica, bound in embossed leather and sitting in a custom-made bookcase: together with a collection of other reference literature it represents the ultimate symbol of learning. Other objects which reference the bird are egg collections, microscope slides, an illuminated manuscript and taxidermied birds.

A window divides the ancient from the 'modern' office. Here, the collector works to compile his definitive catalogue. We find the latest MacBook displaying an entry from Wikipedia. The solidity of information contained in the physical book, has been displaced into ‘bits’, authoritative facts which instantaneously appear at the touch of a button.

A scanner digitises the precious documents which will be uploaded to ‘the cloud’ and the disembodied voice of an Alexa Echo, our twenty-first century oracle, or agony aunt recounts us with tales and sightings of the 'lost' bird. 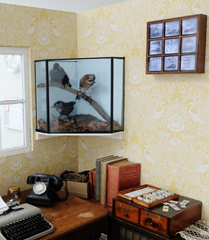 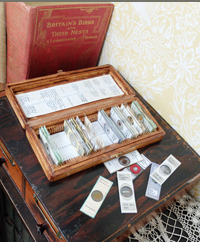 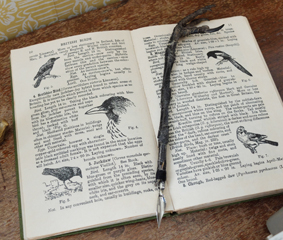 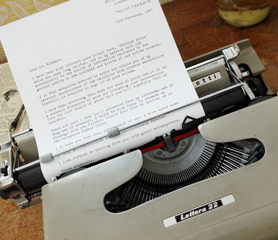 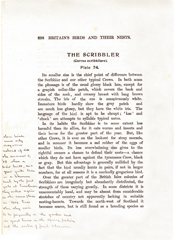 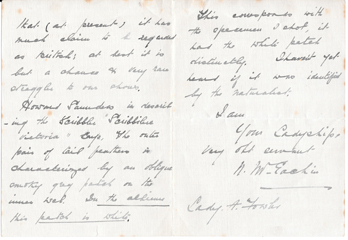 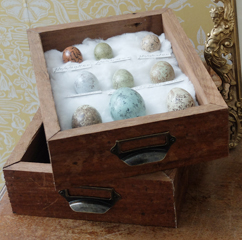 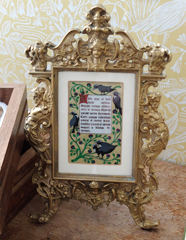 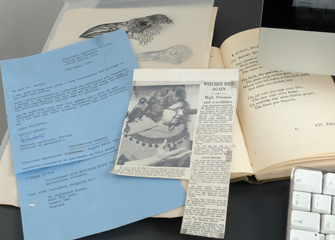 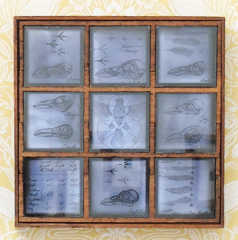 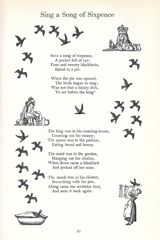 The Enlightenment and the Scriblarians 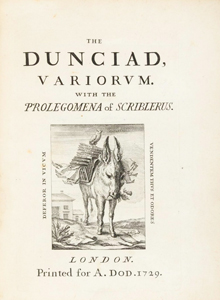 The beginning of the eighteenth century is seen as the start of the age of enlightenment, truth was either based on ‘facts’, a logical deduction where 2+2 can only equal 4, or on ‘authority’. The ultimate authority was that of the church. Beneath these two accepted knowledge bases, there was only opinion, rumour and gossip, and the world was unreliable and untrustworthy.

The institution of the Roman Catholic Church had been questioned during the Reformation, and found wanting. In the age of the enlightenment, philosophers and mathematicians were beginning to question the lesser authorities including those of the ancient philosophers. It was in this environment that in 1714 Jonathan Swift and Alexander Pope, together with a group of fellow Tory literati formed the Scriblerus Club as a platform to voice their satirical reflections on the philosophies of the enlightenment thinkers, and ‘all false taste in learning’. The group drew particular inspiration from Jonathan Swifts's Battel of the Books (1704), a satire on the struggle between the 'Antients', philosophers such as Homer and Aristotle, and the ‘Moderns', for instance Bacon and Descartes’. The collective members of the group embarked on writing the personal memoirs of the fictitious Martinus Scriblerus which were finally published in 1740 as the Memoirs of Martinus Scriblerus. Pope's Dunciad also contains writings from the same Scriblerus.

The Authority of the Oracle 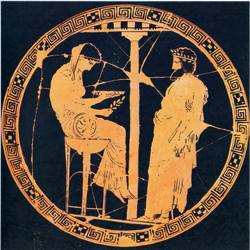 In ancient Greece, it was believed that you could communicate with the Gods in certain times and places and through certain people in order to obtain advice and predictions for the future. However, answers were often obscure and could be interpreted and applied to many different outcomes.

In medieval Europe, for those who could not afford a physician, it was the Wise Woman to whom people turned for advice on illness and medical conditions.

In 1691, a printer, John Dunton, realising he had no one to turn to for advice on an affair he was having without revealing his identity, launched the Athenian Gazette, the first incarnation of the ‘Agony Aunt’ and interactive magazine. 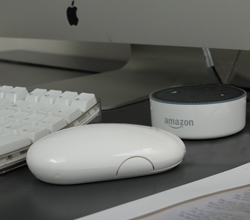 Today, whether it is Amazon's Ask Alexa, Google assistant or Apple's Siri, is it an assistant, a servant, a companion or an oracle we are seeking? Perhaps it is a combination of them all.

Currently the Alexa device is in the early stages of development, and only listens when the wakeup word Alexa is used. Amazon however, have filed a patent to listen to all conversations allowing what they promote as the possibility for future ‘targeted marketing’. As Facebook has been exposed for exploiting the information and 'truths' it has learned, should we beware this as an Orwellian move by another global 'institution' to harvest our data, or embrace the opportunities it brings for faster access to information and products?

The Authority of the Institution

In 1517, the monk and German Professor of theology Martin Luther nailed his pamphlet The 95 Theses to the door of the Wittenberg Castle church. In this tract he rejected the sale of indulgences for the benefit of the church, and began a revolution which ultimately led to the disestablishment of an institution that had ruled people's lives for the previous 1,500 years.

The Roman Catholic Church, as God's representative on earth, was seen as the ultimate authority and the social network which bound a worldwide community together. Today, one platform for our social network is Faceboo. Here we share and announce intimate information and secrets. As technology writer Mic Wright postulates, the medieval indulgence, or prayer for one's soul, is traded for the 'like' and the more 'likes' you attain, the more your message will be promoted.

Some 500 years after Luther, Christopher Wylie has blown the whistle on the use of the information harvested and sold by Facebook to Cambridge Analytica. Similar outrage is building today as the magnitude of the exploitation of trust by a global organisation in order to grow its shareholder's wealth are beginning to be uncovered. 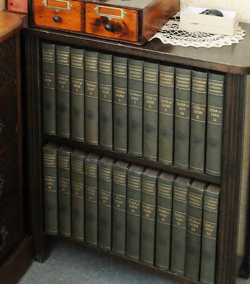 The encyclopedia Britannica was first published in magazine format, in 1768 in a novel taxonomical format where related topics were pinned together alphabetically as a series of essays.

Like the Scriblerus project, this too was written under a pseudonym, ‘A Society of Gentlemen in Scotland’ although it was in fact authored by only one man, William Smellie who borrowed freely from authors such as Swift and unreservedly accepted the unreliability of the information.

‘I wrote most of it, my lad, and snipped out from books enough material for the printer. With pastepot and scissors I composed it!’ ‘With regard to errors in general, whether falling under the denomination of mental, typographical or accidental.... men who are acquainted with the innumerable difficulties of attending the execution of a work of such an extensive nature will make proper allowances.’ 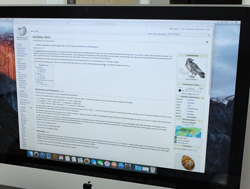 — William Smellie, at a meeting of the Crochallan Fencibles

In 2010, Britannica ceased to be issued in printed form and now sits on virtual shelves costing £1.75 per month

Launched in 2001, Wikipedia is now the world’s fifth most popular website. It is freely accessible and has been designed to have no central editorial control. With a ‘neutral point of view’ (NPOV) policy, contributions can be made by anyone and undergo an elaborate peer review process by highly qualified volunteers and the history of revisions to each article being freely available. However, in academic papers or journalistic research it is seen as a tertiary source and highly discouraged.

The Authority of Ownership 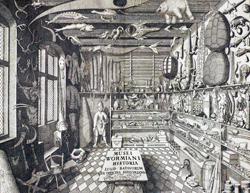 From the fourteenth century, collections containing both ‘artificialia’ and ‘naturalia’, were assembled by the powerful and wealthy as cabinets of curiosities. Owners arranged and rearranged objects to delight and impress friends and visitors, becoming their curators and authorities merely through the act of ownership. Some four hundred years later, as these private collections began to be dispersed into museums, the tales and truths of the owners became attached to the objects as authoritative narrations, accepted without question. 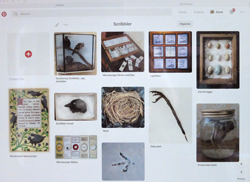 The website Pinterest, cites itself as the world’s catalogue of ideas. Freely accessible to all, it is used by 150 million people around the world every month. It is a virtual vitrine where subscribers can assemble their own personal collections of diverse objects from across the globe. In the words of Andrea Witcomb PhD, these virtual collections force a ‘non-hierarchical space of communication’, ‘flattening social hierarchies and territorial boundaries’. Once again, we are able to attach our own truths and associations in our arrangements of 'objects'.

The Window Between Past and Present 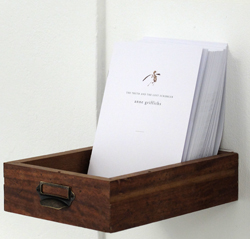 The two desks in this installation are connected, the wall divides, the window unites past with present. Only the visitor can interpret the image as a whole. On a purely aesthetic level we reminisce on old technologies. Should we look further however, we uncover more subtle references to the evolution of the truth, and the adaptations it has taken.

In the golden age of the radio 1930's and 40's demagogs and politicians, such as Hitler and Churchill, were able to influence and inspire the public directly with no fear of the filter of the journalist. Once again, through the use of Twitter, politicians have a platform for self-broadcast, bypassing any form of journalistic commentary and selection.

As the idea of ‘fake-news’ is expanded, as once again we are faced with life in a world of uncertainty, a place where we can trust nothing. Hearing only gossip, opinion and rumour, it is up to the individual to choose which information source he trusts and to seek out his own reliable origins outside the personal echo chamber.

‘Lies will flow from my lips, but there may perhaps be some truth mixed up with them; it is for you to seek out this truth and decide whether any part of it is worth keeping’