2. A piece of metal often resembling a coin and bearing a stamped inscription or design that is issued to commemorate a person or event or awarded for excellence or achievement.

1. To win a medal in a sports competition.

As individuals, the identity we portray is an ongoing performance, subtly changing and adapting to comply with our audience. We create our own brand dependent on the role we wish to play and the “tribe” to which we wish to belong and in the consumer society of today, we are increasingly targeted by manufacturers to display their logos.

In the natural world, a chameleon has the unique ability to adapt its skin colour to its environment camouflaging itself against its predator whist the elk uses its magnificent antlers to display its strength and virility. In the same way, in the military services we employ both these techniques through uniforms, the fatigues that disguise us or the dress uniforms that display our rank and importance.

Medals are traditionally awarded by these services and in the civilian sector, from the scouts and guides to the police service, and attached to otherwise nondescript uniforms as symbols of individual achievement. They become priceless symbols to the outside world of the individual's success. In this piece, the accoutrements of daily life, logos embossed on buttons, designer clothes labels, or tops from beer bottles (now consumed from the bottle as a presentation of status and affiliation) are juxtaposed with medal ribbons drawing attention to how as individuals we value and represent ourselves within a society where branding is paramount: whether through the logo on a tee shirt or the brand of a craft beer. 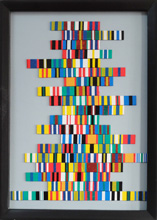 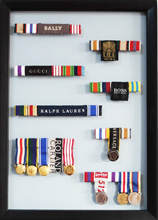 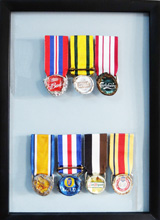