1. A recognition or evidence of merit, especially in sports in the form of cup, plaque or other decorative object.

2.The spoils of war, dedicated in classical antiquity with an inscription to a deity and set up as a temporary monument on or near a battlefield, placed in an existing temple, or new structure. 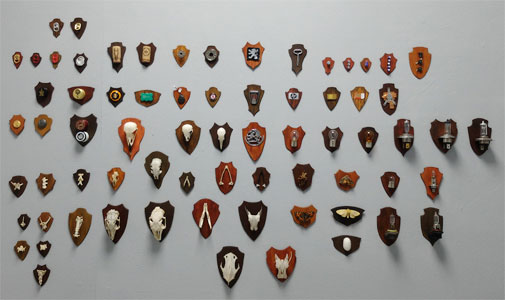 Historically a 'cabinet room' symbolises the power, education and wealth of the collector but this is not an eighteenth-century collection of curiosities to be seen with awe and wonder. All the artefacts in this collection have either been found or recovered from the refuse of everyday life but by decontextualising them, objects become unfamiliar. Meticulously crafting the items as trophies together with the implementation of rigorous cataloging systems, enhances the object's value and we are encouraged to reconnect it with an imagined site.

In a juxtaposition of the past and future, some items can be seen only through the use of QRcodes, perhaps this is how we will view collections in the future, a screen image replacing the visual stimulation and enquiry we feel in front of an object. 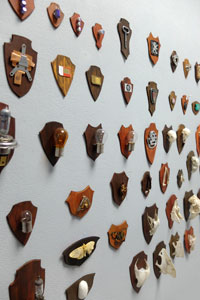 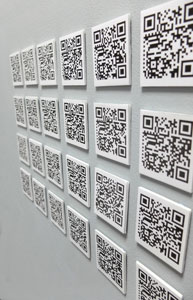 1. Pursue and kill (a wild animal) for sport or food.

2. Search determinedly for someone or something.

Wild animals, typically the large or most impressive males, have been hunted for centuries. In past times the carcass was used for food, before the head, horns or antlers were displayed as a representation of the supremecy of the hunter, often in conjuction with his weapons. Today even the most endangered of species continue to be hunted for recreation, often at great financial cost to the hunter who is directed to the most significant animals. Photographs record the moment of the kill and without the necessity for the meat, bodies are preserved for display in trophy rooms.

In this selection from 'The Collection', my hunt takes the second interpretation of the verb. It is a search for delicate and fragile animal skulls found by chance. These are presented as personal trophies from a walk, on similar trophy shields where they are displayed in my personal studio space.